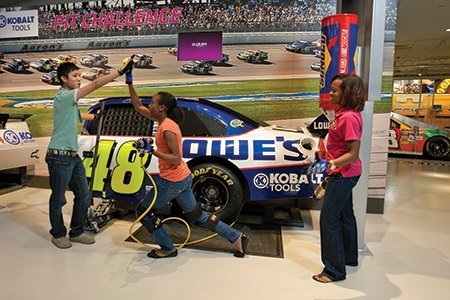 If you’re a NASCAR enthusiast looking for something motorsport-related, then Charlotte’s NASCAR Hall of Fame is just the place for you! Located in the city’s uptown area, the NASCAR museum, as it is popularly called, is the one place where you can get to know about everything NASCAR. Housed in a state-of-the-art 150,000-square-foot area, this popular city attraction maintains, honors and celebrates NASCAR’s rich history and heritage.

There’s definitely a lot to do here: Besides seeing historical and iconic race cars such as the Dale Earnhardt Jr.’s 2008 Chevy Impala SS, the 1952 Hudson Hornet, and a 1967 Chevelle on the banked ramp of Glory Road (which is made to look like a racetrack), you can also visit the Hall of Honor, which pays a tribute to every inductee at the NASCAR Hall of Fame. There’s also Race Week, which is basically an interactive space where people get a behind-the-scenes view of how NASCAR as well as individual teams prepare themselves for racing. The best highlight of this place, however, is the High Octane Theater. This modern-yet-grand 278-seat theater with a 64-foot-wide projection screen features several informative displays, interactive exhibits, and active presentations about different car races, cars, and fans.