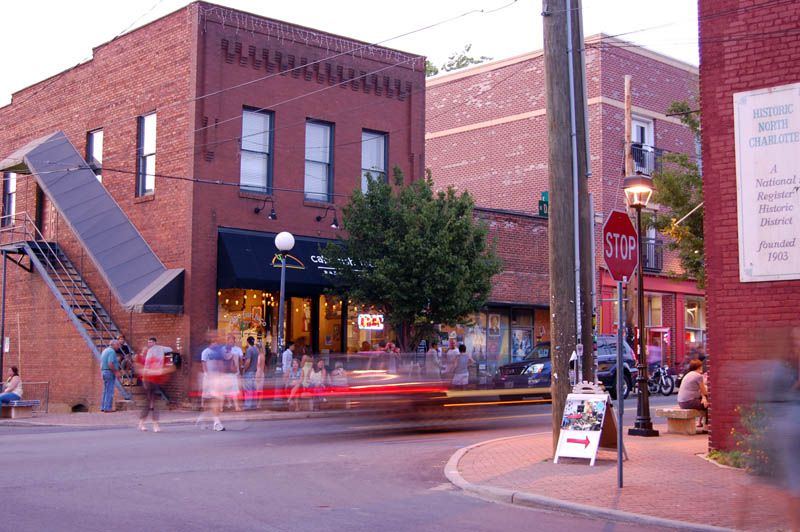 The North Davidson district, popularly called the NoDa district (by blending the two names) is a very popular arts district in Charlotte. Located in the northern part of the Queen City, the district runs along North Davidson Street and between the 30th and 36th street, and continues to about one mile northeast of Uptown Charlotte. Standing as a premier entertainment district, NoDa, which was named so by the architect Russell Pound, has the same geography as that of the National Register of Historic Places-listed Historic North Charlotte.

A very popular center for the arts, NoDa is home to several well-known personalities such as Mitch Brendan (the semi-professional cyclist), John Nolan and Adam Lazzara (lead guitarist and lead singer of the band Taking Back Sunday respectively). It is also the home of some of the Queen City’s famous eateries, live music arenas, historical attractions and of course, all things art.

The NoDa District came into existence over a hundred years ago, when it was founded by a group of rich and flourishing textile manufacturers. Starting with the construction of Highland Park Mill No. 3, NoDa went on to become a flourishing mill village with several successfully-running mills and manufacturing facilities, as well as mill-workers’ residences, all of which stood independent from the city of Charlotte. With time and advancement of technology, however, the popularity of mills began to fade, and starting from the 1975, gradually gave way to what is today one of Charlotte’s renowned art centers that is perhaps most famously known for its bi-monthly gallery crawls.

There clearly much to discover in NoDa, which includes, but is most certainly not limited to the arts. In addition to being the home to several top-line art galleries such as Center of the Earth Gallery, Studio True, Hart Witzen Gallery, and The ArtHouse Center for Creative Expression, among others, NoDa holds its very famous gallery crawls on the 1st and 3rd Saturday of every month between 6pm to 9:30 pm.

NoDa is also a center for fine dining, being home to several popular and interesting eateries such as Cabo Fish Taco (known for its authentic southern food), Bordeaux’s Louisiana Kitchen (famous for its Cajun staples, and bakeries such as Amelie’s French Bakery, and taverns such as Jack Beagles and Solstice Tavern. Fans of drinks won’t be disappointed either, with coffeehouses such as The Smelly Cat and bars and pubs such as Dog Bar, Growlers Pourhouse, Crepe Cellar Kitchen and Pub, and many others.

There are also several music venues such as and historical must-see places such as mill houses and factories. A well-preserved yet open-to-innovation district, NoDa has also seen the rise of multifamily housing units being constructed in recent years, which only adds to the overall quirkiness of the place.

Shopping fans too have a lot to shop from – from Fabric Art, The Boulevard at NoDa, and Sunshine Dreams (which offer a variety of gift items), Real Eyes Bookstore (known for their eclectic collection of books), Yarnhouse (a popular fiber, crochecting and knitting community), and The Natural Voice (which is well-known for its range of wellness-related products and services).